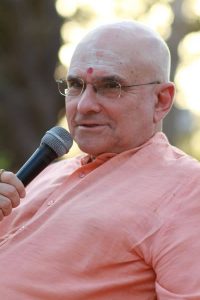 Mahamandaleshwar Swami Shankarananda (‘Swamiji’ or ‘Guruji’) is an American-born guru in the lineage of Bhagavan Nityananda of Ganeshpuri, India.

He traveled to India in the early 1970s looking for enduring happiness and life’s meaning where he encountered some of the greatest living yogis of modern times.

During his search, he spent time with Baba Ram Dass, Neem Karoli Baba, Anandamayi Ma, and practiced hatha yoga with Baba Hari Dass. He finally found his spiritual home at the feet of his guru, Swami Muktananda Paramahamsa, the founder of Siddha Yoga.

After three years of discipleship with Baba Muktananda, he empowered Swamiji to establish the first ashram in the West, and to transmit shaktipat, the awakening of kundalini energy, to seekers. Swamiji served Baba faithfully for many years, while running ashrams around the world. He was a very well-known and popular teacher within the Siddha lineage.

Swamiji has been guiding spiritual seekers and teaching the philosophy of Kashmir Shaivism for over forty years. Known for his ability to make the esoteric philosophy of yoga and eastern spirituality accessible to modern seekers, he created a method of Self-inquiry known as the Shiva Process, which uses awareness, language and questions to develop and fine tune spiritual understanding.

Shiva Process teaches us to be conscious of present feeling, and how to remove mental and emotional blocks and tensions that disrupt our lives. It is known for its ability to improve communication, relationships, and creativity, and is at the heart of the sadhana (spiritual practice) that Swamiji teaches.

Swamiji is the spiritual director of The Ashram near Melbourne, Australia. Along with Devi Ma Saraswati, his spiritual partner, they guide spiritual seekers through the ups and downs of life.

In 2010, Swamiji received the prestigious title of Mahamandaleshwar, or ‘great teacher’ during a ceremony in Ganeshpuri. Devi Ma is a former president of Yoga Australia, and Board Member of Meditation Australia.

Swamiji is the author of several best selling books including Happy for No Good Reason, Self Inquiry: Using Your Awareness to Unblock Your Life, Consciousness is Everything, and Carrot in My Ear. His memoir, Ganeshpuri Days: Memoirs of a Western Yogi, chronicles his early spiritual life when he lived with his guru Baba in his ashram, and is now available worldwide.