07 Jan On Pilgrimage by Swami Paramananda

Posted at 09:00h in Meditation, Philosophy, The Guru by Mamata Malesa 0 Comments

For me, 2020 has been a year where holding onto something higher has been really important.

I know I’m not alone in this. Covid has thrust all of us out of our normal lives into something new.

Normally, at this point I would share some little Ashram story or sadhana incident. You would think that being in lockdown, would be fertile soil for this kind of thing, but I haven’t been able to think of a single thing, which in itself is very strange…

So I’m going to share about my current experience instead:

During much of 2020, I’ve had this nagging feeling that I should be doing something, but not knowing what. It’s not that I don’t know what my current thoughts and feelings are; but it’s a more pervasive, ambiguous kind of feeling. There is a sense that the past is gone, and the future isn’t yet fully formed, and I’m sitting somewhere in the middle.

I can pin-point other times when I’ve had ‘mini’ experiences of this kind of feeling – the feeling of being between one thing finishing and something new coming. I felt like this on my last day of high school, when I moved house, while travelling on an aeroplane, and when I wake up in the morning when I’m not fully asleep, but I’m not quite awake yet either. During this year, this ambiguous feeling has gone on for months.

A little while ago I went and spoke to Guruji about this, and what he said was that there are times in life, when all you can do is just the next thing in front of you.

Now, this is a big ask for me. Being a solid, or intellectual type, I like to plan, to organise, to worry; and especially so in times when the future seems uncertain. But what was being asked of me was actually to let this tendency go.

Recently in trying to do this I’ve realised that my present state is a bit like being on pilgrimage–which is kind of ironic, given much of 2020 I’ve been in lockdown.

On pilgrimage, the pilgrim leaves the comforts and routines of home to walk to some holy place. During pilgrimage there is this in between time, between leaving and arriving when all they can do is put one foot in front of the other and keep walking. I realised that this is the equivalent of me doing just the next thing in front of me.

For a pilgrim, it’s not so much arriving that matters, it’s the inner working that occurs whilst they put one foot in front of the other. I’ve found that while my current state might be ambiguous and a little unclear, it’s not empty or lacking shakti. If I look at it the right way, it’s actually an opportunity to let go of my tendency to worry and is filled with grace and possibility.

There’s a line of scripture which I love and it captures the essence of this for me. It points to a connection to the divine, which is held throughout the various experiences of life. It says: ‘Oh god, wherever I walk I’m walking around you’. So I’m holding onto this as my mantra during this time. 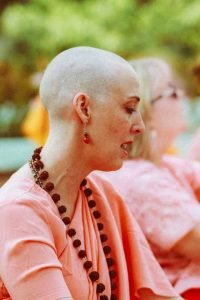