Posted at 09:00h in The Guru by Ishwari 0 Comments

It'll all be ok

by Yogi Sri, written shortly after visiting Ganeshpuri in 2019 with The Ashram Mount Eliza

Gurudev Siddha Peeth is the place where Swamiji did his sadhana (spiritual apprenticeship) under his Guru, Baba Muktananda.

In its heyday, the ashram teemed with people and was open to all comers. It was established in the late 1950s when Bhagavan Nityananda had land set aside and sent his disciple Swami Muktananda to live here. Originally there were just a few rooms built beside a pre-existing goddess shrine but over the next 20 years, particularly after the influx of westerners in the 1970s, the ashram grew to a vast scale, capable of sleeping thousands, with extensive gardens spread over many acres.

It’s remarkable to think that if you had visited Ganeshpuri in the late 1950s it would have been possible to have had the darshan (company) of two great living saints in one day. Many people would come to see Nityananda then on the way home visit Muktananda as well.

For years, I’ve been desperately curious to see the rest of the ashram, but a security card to enter is granted only from a person’s home country and only to those who are long-term members of the community. I’ve heard that the ashram is largely empty.

Muktananda’s grave lies in the centre of a relatively small room that was once his bedroom. It is covered with a white-marble plinth and is surrounded by a low chain-link fence made from pure silver. The floor is also white marble. The room is perfectly clean and a pin-drop silence is enforced. Pilgrims enter the room, walk three times clockwise around the grave then sit with their backs to the wall to meditate. After doing my three laps I see Swamiji sitting and take a fortuitous empty spot right next to him.

I imagine that it is hard for Swamiji, visiting this place that holds so many joyous memories but which is now virtually out of bounds for him. His face is impassive but I sense he is emotional. I have seen him tear-up many times when talking about his relationship with Muktananda. I close my eyes and try to tune in. It’s the same experience every time for me. I can feel an underlying pulse of shakti, but there are layers of unpleasant history lying over the top. Eventually, Swamiji gets up, makes a pranam to Baba then exits. The rest of the group follows his lead and we all make our own way back to Kothavala for lunch.…

On our last day in Ganeshpuri, I make a final tour of the town, starting with Nityananda’s samadhi shrine. I buy a garland and sit directly in front of the murti built over Bhagavan’s grave. 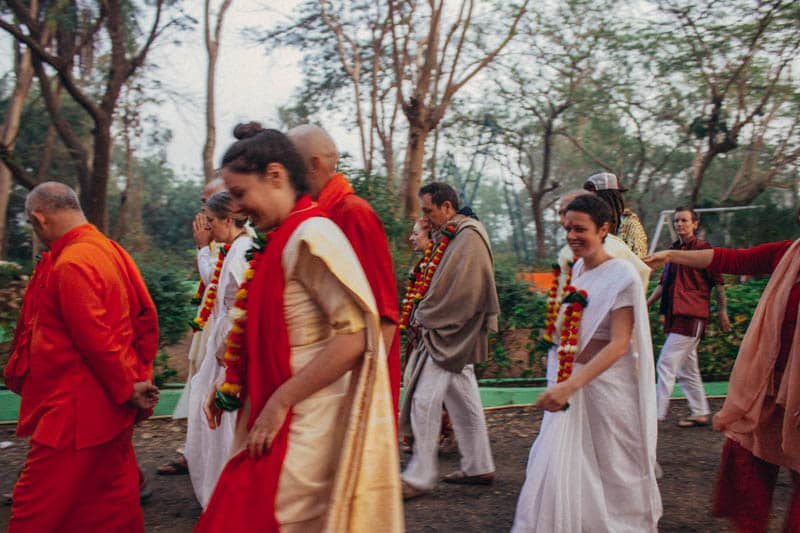 Some years ago, in this same spot, I had an experience that helped me understand why the energy in this town is so special. I had come to pay my respects one last time before getting on the bus to go home. I was sitting for meditation when I became aware of a disturbance in my third eye. I tried for several minutes to ignore it, then tried to let it go, assuming it to be one of the many intrusions that occur when trying to meditate. When neither of those strategies worked I decided to take the opposite tack: to delve into it. So I brought my consciousness up to the third eye and peered into the disturbance.

Now it started to take shape. It was as though I was looking at a computer graphic of a cyclone or tornado. But instead of having a swirling motion, it was more like a geyser or an eruption. I looked closer. There was a single point, a singularity from which an outpouring of energy was coming. This point seemed to be in front of me and below, deep underground beneath the statue. I realised with a start: this would be the place where Bhagavan’s body lies. An endless hurricane of spiritual energy was spiralling up out of the ground from that spot.

Heaven and earth are close together in Ganeshpuri. After a few days here, my mind slows. Negative emotions and thoughts lose their power and meditation comes easily. It is as if there is an open portal to a higher realm. Now I understood why: the town is continuously bombarded by a nuclear reactor of shakti, a benevolent Chernobyl. A villager told me that Bhagavan had said he would take the kind of samadhi where his energy would remain with his body. It seemed true. I had now had a direct perception of it.

Nityananda arrived in Ganeshpuri from the south of India in the 1930s. At the time there was only a small shiva temple and dilapidated kund (hot springs) surrounded by jungle. Over the years the township built up around him. Little is known of his past and family origins. He was considered an avadhut: a person with no awareness of social standards. It was only with considerable difficulty that his devotees persuaded him to wear a loincloth rather than walk around butt naked. He would spend hours a day resting on a concrete slab while pilgrims poured in to see him.

Often he would sit in silence, occasionally making short cryptic statements, meaningful to only one single person in the throng. He was friendly to the local tribespeople and their children but ambivalent to other visitors, especially the pompous. Sometimes a person would enrage him and he would throw a rock at them. 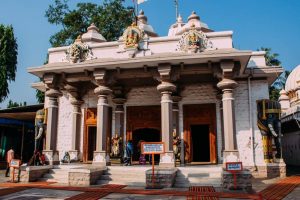 I have heard many miracles attributed to him. Most are generic, such as the old one about the train: ‘Bhagavan was travelling on a train to X. The conductor found that he did not have a ticket so told him to get off at the next station. After that the train became stuck and would not move from the station no matter what the engineer tried. Eventually one of the travellers told the conductor that the person he kicked off was a great saint, so the conductor apologised and invited Bhagavan back on. Immediately, the train was able to resume its journey.’

This story may have a basis in truth somewhere but it has been spun many times about different saints.

However, I once met an old man who told me something that I found utterly convincing. In 2009, Swamiji asked me to record peoples’ recollections about Nityananda from whoever we could before these passed out of living memory (an excellent project, alas never completed). Word of this got around and an elderly gentleman arrived from Mumbai to be interviewed. He told me that in his late teens he had been running across a railway track when he fell and seriously cut the palm of his right hand. At the hospital he was stitched up but badly. As the wound healed, his hand curled into a paralysed claw. This happened just a few weeks before he was to sit his final high-school exams, the results of which, in those days, would determine his whole future. What to do? He was unable to write, there was no time to get the hand reset and no possibility of a dispensation from the school.

His parents were devotees of Bhagavan so as a last resort he decided to visit him. He told me: ‘When I arrived in Ganeshpuri, Bhagavan immediately looked me in the eyes and said, “First go to the kund.” This was not normal, many times when I visited him he never said anything to me or looked at me. So I went to the baths. When I got in the water, I felt something happen. I took my hand out and it was completely healed. It was like there had never been an injury’”.

He held up his hand, beaming, ‘Look, not even a scar! Then I went running back in great excitement to see Bhagavan. But as soon as I came into the room he looked at me sternly and I understood he was giving me a message. He knew what had happened and he was telling me, “Don’t say anything’”.

Then the old man began to weep. ‘You can’t describe what it was like to be around Nityananda. It’s impossible to put into words’.

All the interviews ended this same way. The subject would weep and say it was impossible to describe what it was like to be around Bhagavan. But I think that I do understand: the people who came to see him had an experience of God.

Today I am not having any “spooky” experiences. I sit for a while in the temple then give the priest my offering and continue on my farewell tour. I stop in at the small room at Bangalorewalla where Bhagavan died and walk up to the hill to the Ganesh temple one last time. From up top, Mandagni mountain is just an outline and I can barely make out anything in the valley, so thick is the smog.

Walking home I review the trip in my mind. I have made a conscious effort to be more sociable and open hearted to the other people on the tour this time rather than my usual stingy self. I decide that I can probably give myself a “B” for this. Also, I have gotten along well with Vani and not been (too) jealous about the time and energy she has spent running the tour. At least a “B” for that one too, I think.

So overall it has probably been one of our best visits. But now it is definitely time to go home. We have been well looked after, as always, by Iqbal and his family but living in India with its endless hassles wears you down after a while. Besides, there is my business to return to along with all its headaches: sales and cash flow and no doubt a month’s worth of pent-up issues.

Thinking of this makes my belly clench then I remind myself of the new resolution I have made here. As time passed on this trip, and as I settled into a more relaxed space, the realisation struck me that I should make more of an effort in daily life to live with the belief that things are going to be OK rather than my usual clenched posture of fearing that a disaster is always around the next corner. So, I tell myself sternly that whatever dramas are waiting back in Melbourne, I will be capable of dealing with them…

On the last stretch of the walk home, the entry road to Kotawalla turns a corner. On either side of the dirt road a colourful fabric modesty screen has been erected by Iqbal’s crew to protect the delicate sensibilities of us westerners from having to view the open sewage channel with attendant rubbish that crosses under the track here.

Because of the screen and curve in the road I cannot see any traffic but I hear the unmistakable buzzing sound of a tuk tuk bumping along the road. It rounds the corner, drives past then stops about five metres behind me. The motor is turned off and now there is silence except for the ticking of the cooling engine.

I turn to look. A beefy arm with a clenched fist is thrust out of the drivers’ window, and a familiar raspy voice calls out: “1 2 3 4!”

The arm withdraws. The tuk tuk starts up again and drives off towards the village.